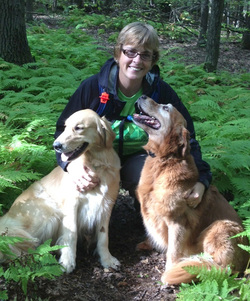 Robin Zefers Clark was raised in a small agricultural community in Western New York. She fondly remembers her first art lessons with her grandfather, Charles Zefers, a retired commercial artist. His quick and decisive pencil strokes were mesmerizing to the five year old and had a profound influence. Art quickly became her second language.

Robin received her Associate of Arts degree from Finger Lakes Community College and a Bachelor of Science degree in Art Education from Buffalo State College. She received her Masters of Science degree from Rochester Institute of Technology, with a major in oil painting and intensive work in graphic design and photographic studies. It was during her last year at RIT that she took a watercolor course. At first she intensely disliked the medium and it’s unruly behavior, but by the end of the semester the decision was made to put away her oil brushes and pursue watercolors.

Since that time, Clark has developed a style that incorporates the use of a limited palette of three colors, cadmium red, cadmium yellow and prussian blue. She uses a direct application of flat color giving her paintings a bold and high contrast quality similar to that of a tempera/watercolor cross. Robin has always loved a good story and often weaves them into her paintings. She feels her best review came from a woman from Louisiana who wrote, ignoring the dictates of grammar “Your paintings make me feel like you been in my head, like you seen what I seen.”

Robin has had several solo and group exhibitions and has been featured in articles in Country Woman Magazine, The Buffalo News, and Focus. Her work has won numerous awards and is featured in private collections throughout the United States, Canada, Europe and Asia.

Robin Zefers Clark lives in the pristine Allegany mountains of western New York state, where she she owns and operates Brookside Studio. Much of her inspiration is found in the land and people that surround her. While she’s waiting for the paint to dry, she enjoys hiking the local trails on foot, skis or snowshoes, and spending time with her loyal dog Cutter.